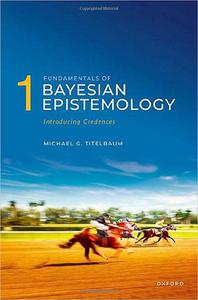 English | ISBN: 0198707614 | 224 pages | EPUB | April 28, 2022 | 1.79 Mb​
Bayesian ideas have recently been applied across such diverse fields as philosophy, statistics, economics, psychology, artificial intelligence, and legal theory. Fundamentals of Bayesian Epistemology examines epistemologists' use of Bayesian probability mathematics to represent degrees of
belief. Michael G. Titelbaum provides an accessible introduction to the key concepts and principles of the Bayesian formalism, enabling the reader both to follow epistemological debates and to see broader implications
Volume 1 begins by motivating the use of degrees of belief in epistemology. It then introduces, explains, and applies the five core Bayesian normative rules: Kolmogorov's three probability axioms, the Ratio Formula for conditional degrees of belief, and Conditionalization for updating attitudes over
time. Finally, it discusses further normative rules (such as the Principal Principle, or indifference principles) that have been proposed to supplement or replace the core five.
Volume 2 gives arguments for the five core rules introduced in Volume 1, then considers challenges to Bayesian epistemology. It begins by detailing Bayesianism's successful applications to confirmation and decision theory. Then it describes three types of arguments for Bayesian rules, based on
representation theorems, Dutch Books, and accuracy measures. Finally, it takes on objections to the Bayesian approach and alternative formalisms, including the statistical approaches of frequentism and likelihoodism.